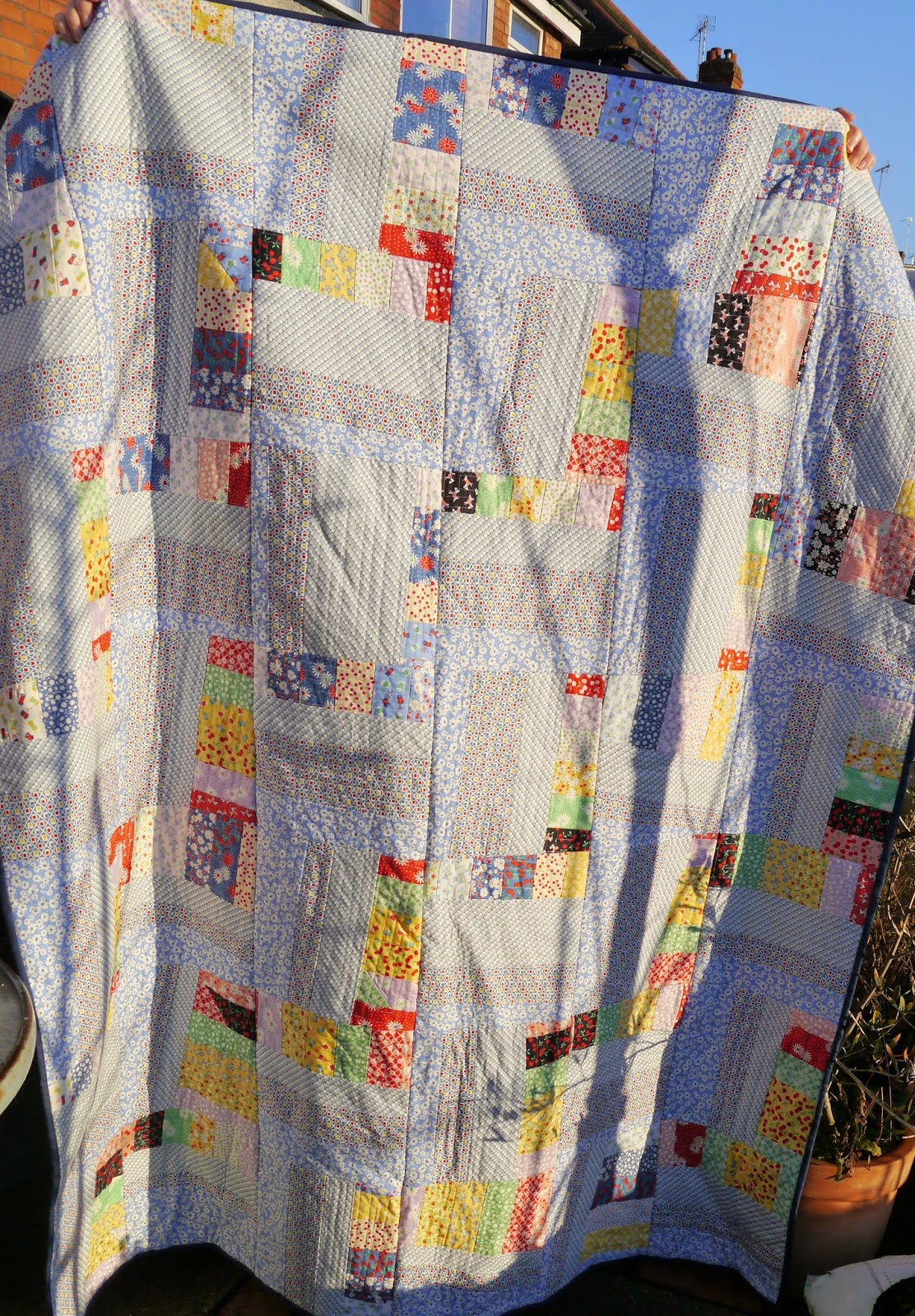 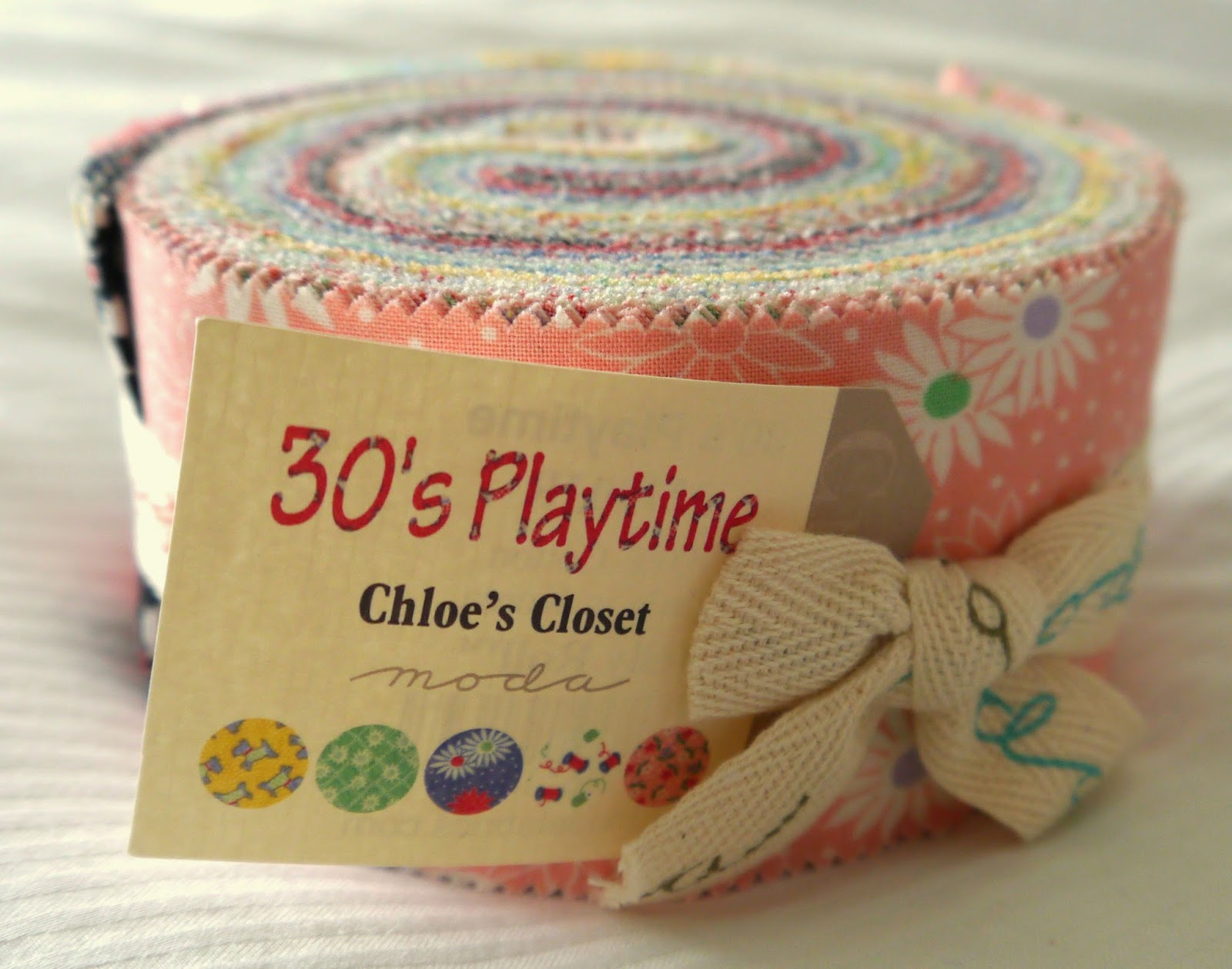 Back in November last year I used my first ever jelly roll to make a 'quilt top' (see post here).

Now I have some strong ideas about quilts.  They have to be big enough to use - and by that I mean big enough to wrap up in and have a snooze without bits of you poking out and getting cold. 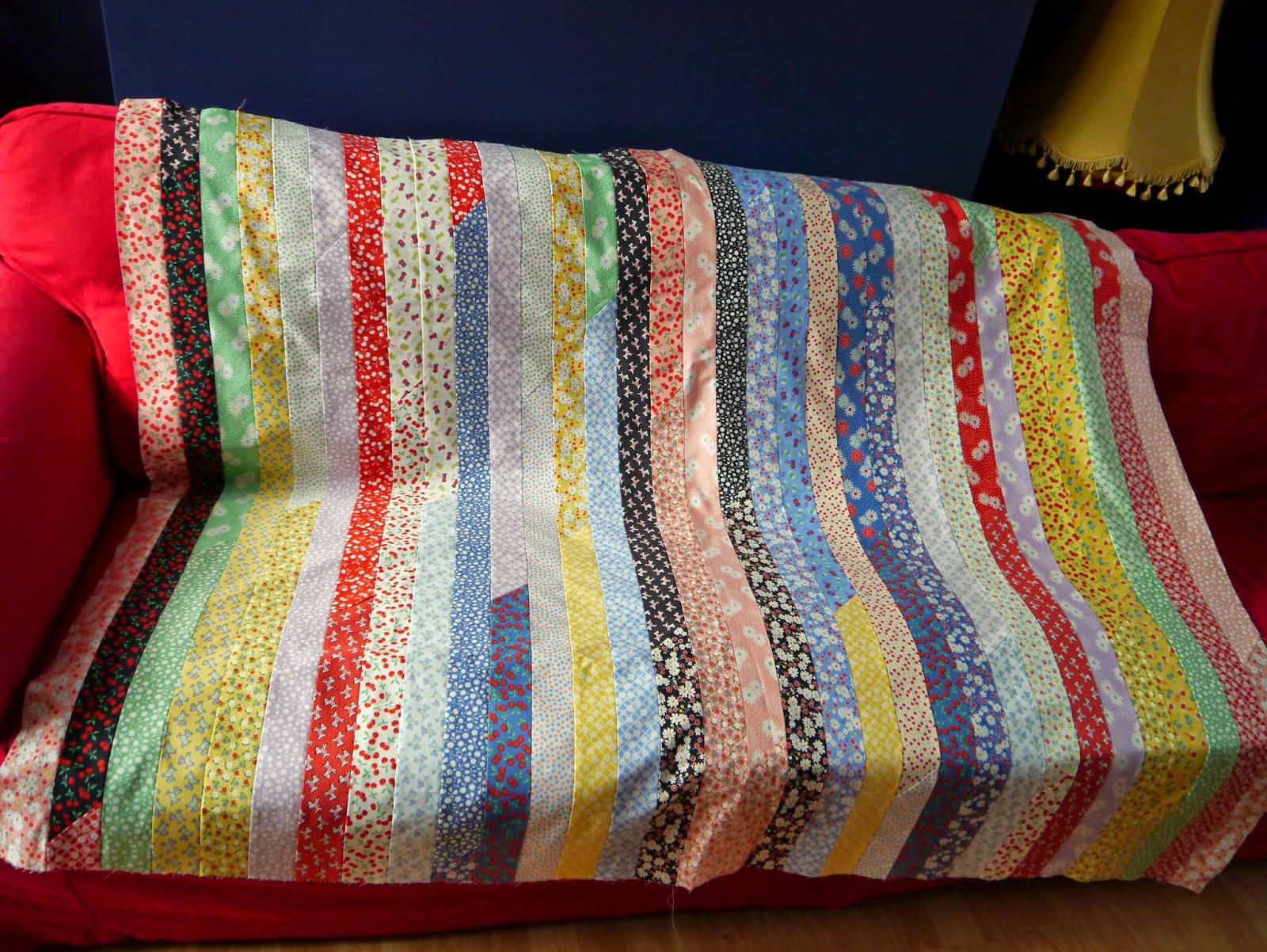 I'll make an exception for a cot quilt (see my first and to-date only cot quilt here), but anything that can't be used on a bed isn't a quilt.  It can be a quilted piece of art or a quilted table runner or whatever, but it isn't what I call 'a' quilt.  Sue me, I dare you!

Any-hoo, this jelly roll top was too small and somehow unaesthetically pleasing.

Now I'd heard tell of a mysterious technique called 'quilt-as-you-go' and decided to have a crack at it.
I have a theory that one of the reasons quilting is popular in big countries with big houses and less of a thing in Britain is because it is such an enormous ball-ache basting a quilt.  I have a tiny house by American standards and basting involves shifting all my furniture about to find enough accessible floor space.  Then I have to scrabble around in an undignified manner (roping in my Mother, poor thing), swearing and making unreasonable demands on a woman in her 70s.  Then I have to wrestle the beast through my bog-standard machine to quilt it.  No fun there, either.  'Quilt as you go' seemed to solve one of the most vexing problems involved with my favourite hobby (basting) and promised to let me play with the one aspect of quilting I hadn't been able to fully embrace (er, quilting!). 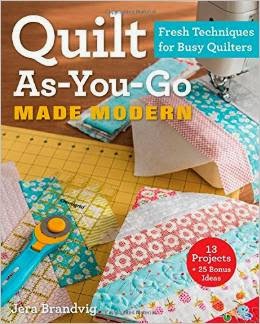 I bought 'Quilt As-you-go Made Modern' by Jera Brandvig and was pleased to see that she was making full sized bed quilts with this method.  Hurray!

I bought a twin sized piece of batting and cut it into 42 11.5 inch squares.  The idea is that the batting is an inch bigger than the finished block you're after so you can neaten and square up.  I felt very naughty...and yet strangely liberated.

Then I decided to embrace the lack of precision needed for this technique and - shudder - I hacked my jelly roll top to pieces.

I sat there with my scissors, chewing my lip for an age before I actually cut up my perfectly nice quilt top, leaving me with uneven strips.

I added three other 30's Playtime prints to make a sort of wonky 4 strip rail fence, adding a strip at a time to each block, finger pressing it flat, then quilting a spiraling rectangular pattern to each strip before sewing on the next.

So far I was thrilled with how quickly the quilt came together.  Then came the bit I was less convinced would work out well - sewing all the quilted (and trimmed) blocks together.

After sewing two rows of blocks together, Jera recommends that you trim the corners to make sewing the rows together easier and remove bulk from the joins.  Good plan, Jera.  When it was all sewn together I was pleased that it seemed to have gone together so easily.  I was then able to add the backing on the dining table rather than the floor. 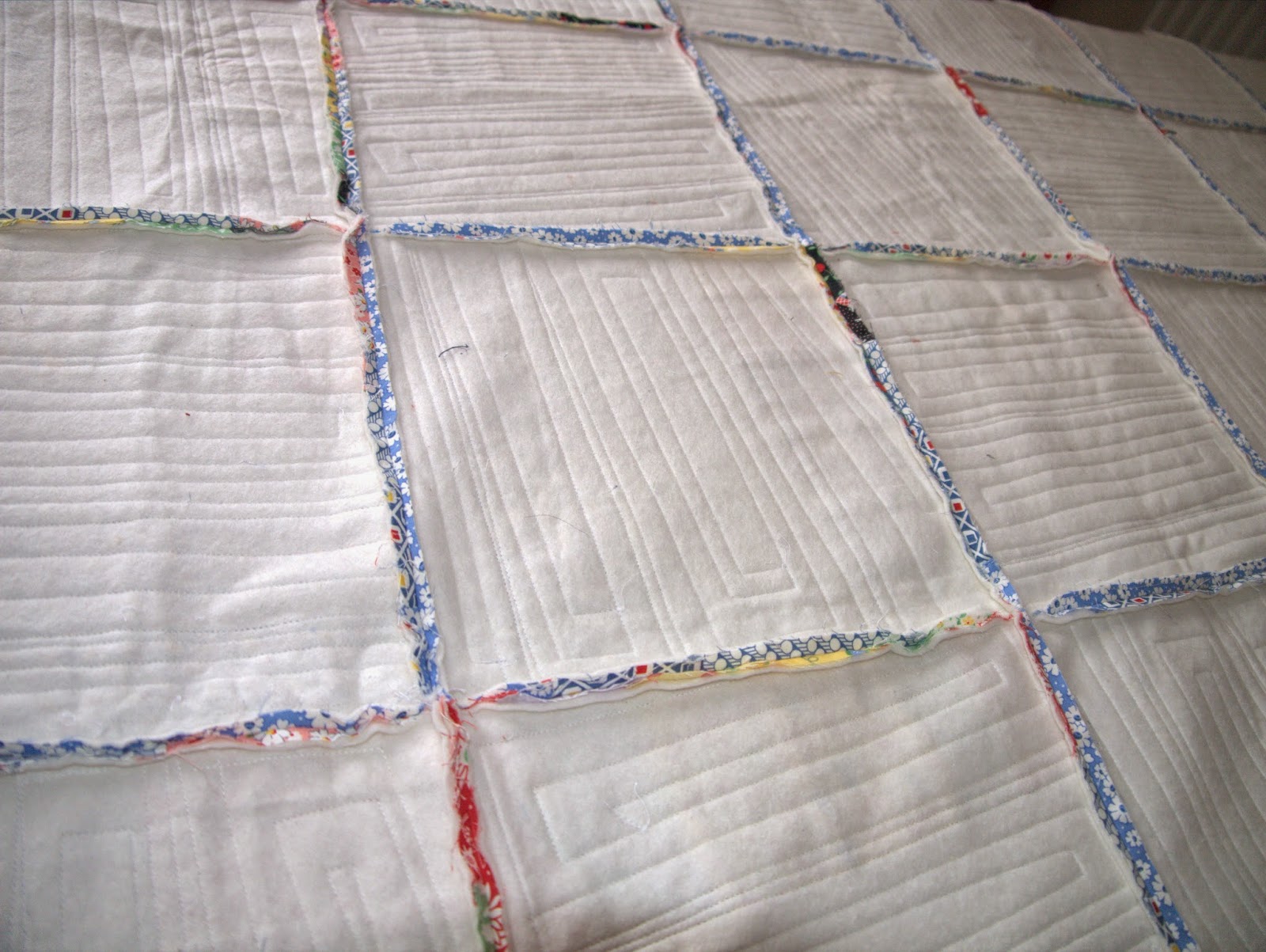 I quilted in the ditch in a dark blue aurifil cotton that matched the navy backing and binding.  Minimal quilting was needed to attach the backing and ta-dah!  I was done!
On the down side, you can feel the grid of seams through the backing and I'm not sure whether this is something that I'll notice when I snuggle up with it.  They really annoy me at the moment, but I I'm hoping that as this quilt is for me (another first!) I'll get over it.  I'll let you know.

Posted by Patchwork Polly at 20:16